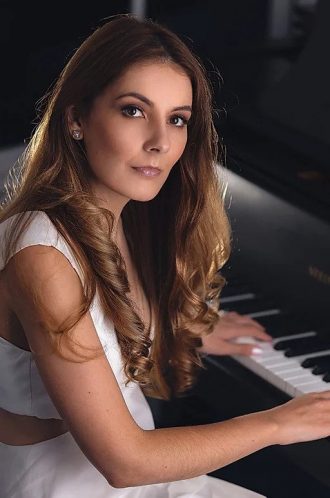 Kirsty grew up in the music industry, signing her first recording and publishing deals at the age of fifteen.

Today, Kirsty is one of Australia’s most in-demand vocal coaches and songwriting consultants. She is honoured to work regularly with international recording artists, Academy award-winning actors and music theatre stars, alongside some of the worlds most legendary creatives.

With a nurturing approach and over twenty years of professional experience in the music industry, Kirsty is renowned for helping artists achieve their goals in the studio, on set, on tour and throughout their careers.

A graduate of Sir Paul McCartney’s Liverpool Institute of Performing Arts, Kirsty toured extensively as a young vocalist and songwriter before furthering her education with master voice teachers, voice scientists and music teams in London, LA, Nashville and New York. She was the first South Australian to be recognised and authorised by Vocology In Practice, an LA based global network of elite voice professionals.

Kirsty holds a Bachelor of Music (Music Theatre) and a diploma of Performing Arts (Vocal Performance/Songwriting) as well as multiple internationally recognised certifications in Vocal Pedagogy and Vocal Health. She is currently completing Post Graduate studies in Psychology and Performance Science.

A lifelong dream chaser, Kirsty is fiercely proud of her Studio family.